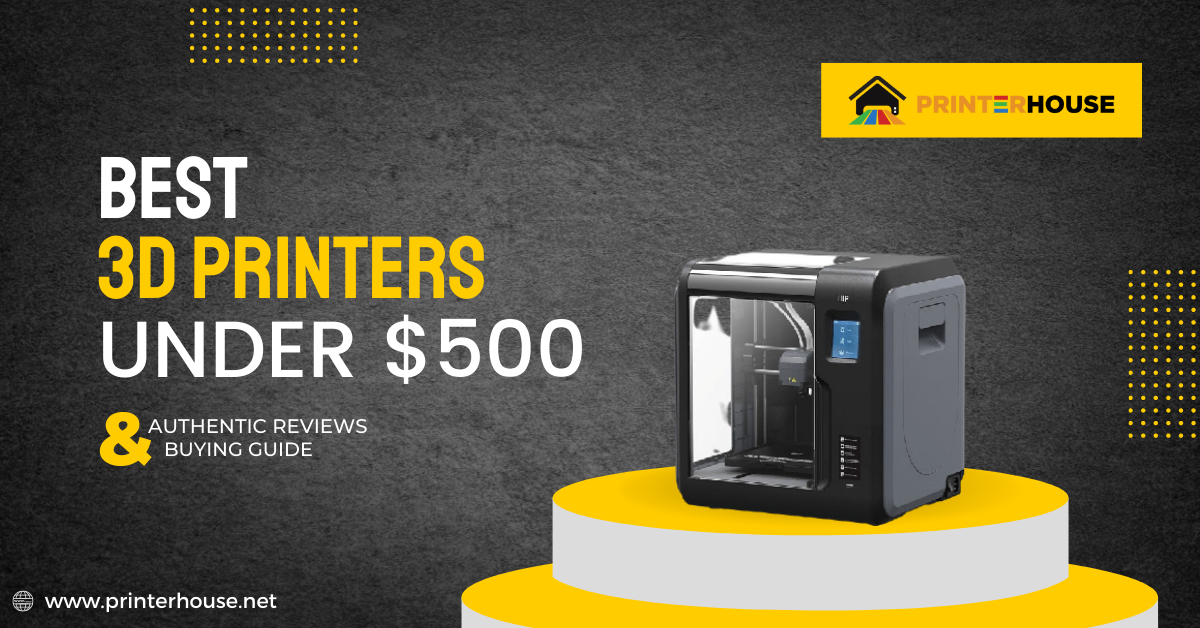 Are you seeking the best 3D printer under $500?

With our clever guide, we have just what you need. The average Joe can only just now buy a 3D printer despite them being around for more than two decades.

The machines were simply too large and expensive for many years to fit into most people’s homes or offices. In our previous list, you’ve seen that the best 3D printers can be bought for less than $1000, putting their price within reach of serious hobbyists and creators.

For those who aren’t yet invested in the field, that kind of money is definitely pushing it. If you’re not sure what 3D printing is all about, let alone ready to dive in headfirst, that’s still a chunk of change to pay.

I’ll be reviewing 3D printers under $500, some of which we have tested and are the best on the market.

With the Sidewinder X1, Artillery once again proves itself as a reliable and cost-effective manufacturer of 3D printers. In the quest for something less expensive, a 3D printer that has been tried and tested is usually the best option.

Its dependable performance and good flexibility were two things I liked most about this 3D printer.

Matching the slicer with filament settings is crucial. Additionally, you must set the bed temperature, the extruder temperature, and the print speed.

I no longer had stringing and surface artifacts after matching the settings. As soon as the settings are optimized, the prints are excellent.

With a maximum printing speed of 150mm/s and relatively quiet operation, this 3D printer can deliver a solid output.

People who are interested in 3D printers often overlook the second part. It is difficult to concentrate if you are within hearing distance of a loud 3D printer even if you are in another room. Furthermore, 3D printers that are more expensive offer sound-dampening features.

Other 3D printers will struggle to match the Sidewinder X1’s quality and affordability.

My apologies, but this one is a bit shaky…

A sale from Amazon has lowered the price of the CR-10S 3D printer to a point where it normally falls outside of this range. The price will remain the same until they change it back.

The quality of a 3D printer isn’t always proportional to its price, as is the case with many things you buy. I had high hopes for the 10S in terms of this.

To tell the truth, when you start using the Creality, it feels like you’re dealing with a more expensive 3D printer.

This printing machine is easy to setup, and the 200mm/s print speed makes it even faster than the Sidewinder.

Furthermore, it can handle anything the Sidewinder could handle… and then some.

The machine is one of the best-valued in its current price range.

In addition to having dual extruders, the X-Pro stands out from the other 3D printers on my list with its unique design.

It’s surprising that a dual-extruder made this list, since they typically have a higher price tag.

This budget printer has a lot to offer despite its low price. Building speeds limit to 150mm per second. Additionally, this printer is compatible with PETG, offering the same versatility and convenience as the Sidewinder.

A number of benefits come with the Anycubic Mega X 3D printer.

Though it doesn’t reinvent all the basics of 3D printing, it still carries out most of the basics quite gracefully.

Despite its low price-point, it is durable, reliable, and efficient.

This 3D printer’s accessibility was especially appealing to me. The software was relatively easy to use and the setup process was effortless compared to others on this list.

If you’re new to 3D printing, you’ll want to learn what’s going on; if you’ve been doing it for a while, you’ll want to move quickly without spending too much time fixing problems.

You won’t need to level your bed or clean your extruder much, either, since leveling your bed will be an easy task.

5. FlashForge Finder (Best For Educational Use)

It’s clear that you can do a lot of great printing on a budget from all of the 3D printers on this list! In some situations, however – particularly for students and those just getting their feet wet – something much less than $500 might be the best choice.

FlashForge Finder is here to help…

Although well under $500, this 3D printer is still capable of competing with some of the best products I reviewed.

Additionally, its maximum print speed is 200 mm/s, which ranks among the best. Moreover, it is equipped with an automatic leveling system, usually reserved for machines costing considerably more.

Despite its affordability and reliability, the Photon S is a real resin printer. In general, I liked that leveling was a relatively straightforward process on this 3D printer right out of the box.

Furthermore, the print quality of this machine is off the charts, providing a high level of detail rivaling any other 3D printer under 500 notes.

Assembly of a printer can be challenging, frustrating, and time-consuming.

After all, it’s usually well worth the effort once you get going.

Its very reasonable price, combined with its ability to hold its own in almost all the essential specs, is a compelling reason to consider DIY 3D printers. The flat bed design of this printer ensures that the surface is heated evenly across the entire print area.

In the international market, delta-style 3D printers have gained ground.

The QQ-S delta printer, which I’d heard good things about, is the most popular style on the US side of things, which is why I was excited to test it out.

Basically, the QQ-S offers all the features of a delta printer.

As a result, you will be able to create some great new things with taller objects.

A 300mm/s print speed also puts it in the top tier of best 3D printers under 500 on the list. The disadvantage is that it is louder than the rest of the 3D printers mentioned here. You will need an adapter because you will not initially be able to use this 3D printer with American outlets.

A good reason for Prusa’s reputation as the gold standard in modern 3D printing technology.

Even though it’s far too expensive to make it onto this list, the Original Prusa is one of my favorite printers of all time. We’re lucky, however, because their miniature version of the Original does not exceed $500.

Even though it has a smaller build volume, this printer offers a lot. I always prefer longer print projects for anyone who wants a printer that can handle up to 200 mm/s.

It is also the only 3D printer that is capable of handling a wide variety of filament types (ABS / PLA / ASA / PETG / Flex), which means you can print out a wide range of projects on it.

This range from Anycubic includes the Chiron, which is an excellent 3D printer.

Chiron is their largest printer, offering a larger printing volume (400 x 400 x 450mm) than any of their Mega models (including the Mega X).

Since the print bed tends to be the source of many issues, this feature sets the Chiron apart from many of the other less expensive printers on this list.

There are quite a few printers that have serviceable beds, but none have an Ultrabase Pro that can provide the balance between strength and immediate release that the Chiron offers.

I have reviewed some of the best 3D printers ranging from $500 to $1000. My research revealed several printers that were different from each other, but was there any printer that stood out from all the others?

In terms of value, Anycubic Mega X 3D printer had the highest value on the list thanks to its incredible low price. My impression of this printer is based on a few things.

This printer was simple to unpack and assemble from the very beginning.

Physically, the assembly is simple: mount three cables, screw in a few screws, and then level the bed. Even if you’re new to this field, you can complete this process in about half an hour.

My preference is to use a 3D printer that’s easy to use; if you’re new to 3D printing, you want to be able to understand what’s happening, and if you’ve been doing it awhile, you want to focus on creating instead of fixing mundane problems.

This simply explains how easy it is to use this 3D printer.

It’s important to feel in control from the very beginning.

Furthermore, dependability is crucial. The Mega X was not like any other 3D printer on this list, where regular maintenance and tweaking are required.

In this case, I transported the machine to another room and expected that I would have to level it. As a matter of fact, it was level, and I was ready to start my next project immediately.

The Mega X offers a lot of flexibility when you need it.

It’s easy to level your bed, as well as clean your extruder – though there won’t be much of that involved either.

In conclusion, let us say again that the price is extremely reasonable for this 3D printer.

In my opinion, this falls right in the middle between “cheap” and “mid-range” and the quality of 3D printing makes it a good buy.

That’s all we have to say about the best 3D printers under $500.

What you need to know about 3D printing – and without breaking the bank!

In addition, although none of the printers on this list come equipped with all the fantastic features of more expensive models, any of the models on the list can offer similar performance to models many times their price.

There is likely something on this list to meet your needs. The only limit is your imagination!