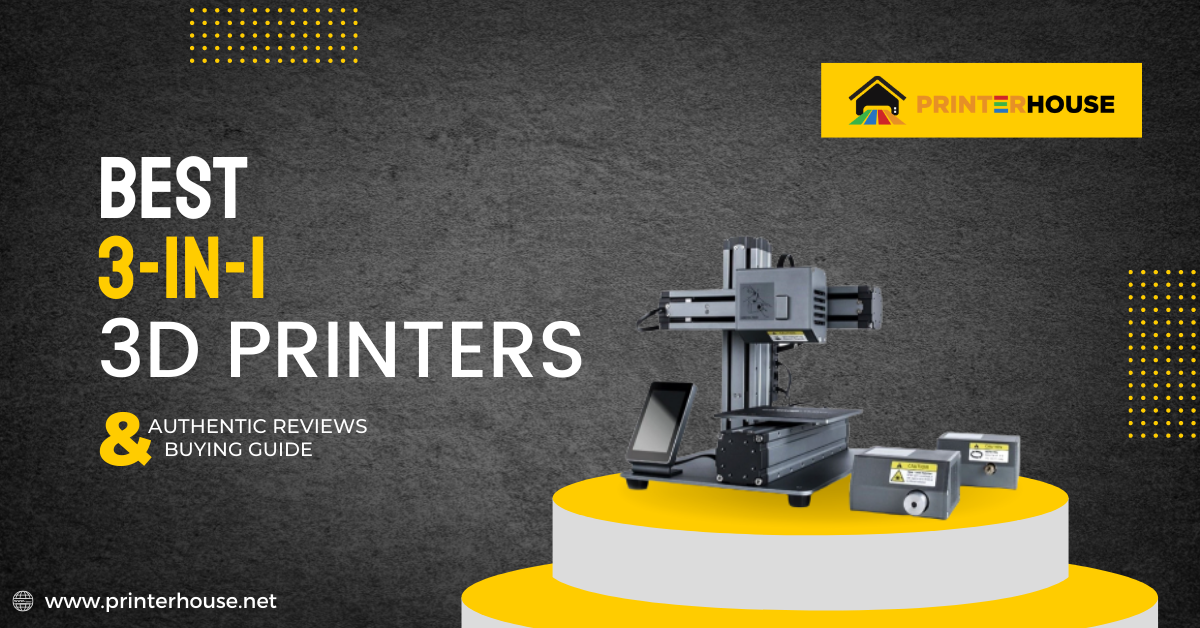 Your 3D printer and you are tired of each other? Are you looking for some spice? Would you like a CNC milling machine to make the job easier for your 3D printer?

If I told you you could have a little of both worlds, would you believe me. Your future machine-wife will also be able to laser engrave, CNC machine, make food (yes, her future will include cooking as well), and do so much more than just 3D printing!

It has the capability to do 3D printing, laser engraving, CNC machines, printing food, and more.

Many different people use them, including hobbyists, engineers, businesses, and chefs, among others. If you don’t want multiple machines cluttering up your house, these machines can be a godsend. Also, purchasing all those gadgets might be expensive.

Here are the differences between these machines.

It shouldn’t come as a surprise that an all-in-one 3D printer functions primarily through 3D printing. 3D printing involves assembling a 3D object layer by layer by depositing material on top of each other.

Metal, plastic, and wood are cut with a laser to create objects of different shapes. Engraving with a laser, however, can be done on similar materials using a low-powered laser.

Milling using CNC machines is a popular method used in subtractive manufacturing (removing materials from objects to produce new ones). Cutting the block to be milled is done by moving a rotary cutter along a preprogrammed path.

Objects are printed using a syringe when using paste extrusion, such as PVC foil, wax, EVA foam, and so on. A uniform semi-solid paste can be made out of any food product.

Polystyrene foams and other materials can be cut with a hot-wire cutting process.

What are the benefits of 3D printers?

It is possible to do a lot with a 3D printer with all-in-one features. However, Jack doesn’t seem to have any mastery over anything.

They won’t perform all tasks as well as larger machines. Hobbyists would benefit most from these 3D printers. As a business owner, you might want to reconsider if you are running a full-sized business.

In keeping with its predecessor, the Snapmaker 2.0 is among Kickstarter’s most funded 3D printing projects ($7.85M to be precise). Despite its smaller margin, Snapmaker Original keeps you hooked.

The only difference between these models is the build size.

In contrast to the original, there have been a few improvements in the 2.0 version. New features in the new version include automatic bed leveling, which lacked in the older version. The laser toolhead camera is another great upgrade. Variable CNC milling speeds are a final noteworthy improvement.

In addition to looking gorgeous, the Snapmaker 2.0 exudes class and quality. Its body is crafted from machined metal with meticulous attention to detail. You will probably want this machine if you enjoy machines.

My prints are in good quality; they came out nice and smooth. You can bet the printing won’t be world-class (remember, this is Jack).

There is unfortunately a slow printing speed with this one, and a snail could speed past it. However, the machine keeps going to complete the job.

This can be accomplished using a laser engraver. Material types include plastic, leather, wood, acrylic, and non-transparent acrylic.

In addition to the four lasering modes, there is also a vector and text mode. It also has a camera that can be used to take pictures of the uncut material block. With the aid of the picture, you can then easily align your design within the software.

With CNC milling, some things are improved while others are left unchanged. They improve efficiency by changing the hardware.

In the case of the A350 with it’s enormous volume of builds, the Snapmaker 2.0 is the best value for your money.

It is this machine that began the legend of Snapmaker. Almost 2.2 million dollars was raised by Kickstarter backers, making it one of the top funded projects. A modular 3D printer for under $1000 was the best when it was released.

Apple’s packing is excellent if you’ve ever had experience with it.

It’s time to set up your machine after you unbox it. Taking your time is important. Thanks to Snapmaker, you won’t have any problems following their useful step-by-step instructions.

The 3D printer exhibits high build quality once again. There are no flimsy parts on the system.

Modules can be switched between fluidly and easily. A few screws need to be undone, then the cable is removed, the new module installed, it’s then reconnected. The print quality was fine in our test. Throughout the printing process, there were no errors that I could detect. The nozzle can reach temperatures of 250°C, so you can use a wide range of materials.

With a laser power of 200mW and a wavelength of 405nm, the laser tool module can be used. It offers decent performance and the job gets done. While the laser engraving was easier, I did miss the 2.0’s camera.

Snapmaker Original is rudimentary from a CNC milling standpoint compared to Snapmaker 2.0 – this CNC is rudimentary in almost every sense. It is not a machine designed for industrial level production, the CNC module is meant for light duty work only.

The work volume was also disappointing at 125 x 125 x 125 mm. This 3-D printer won’t break any Guinness World Records despite its incredible size.

Although the 3D printer is not cheap, it is worth the price compared to its successor.

This engineering marvel is a Zmorph. Among these 3D printers, I would choose this one if I had to choose one.

As you look at the machine, you think, “Sexy”. This article may be a snare for you if you are attracted to machines (I know my machine-o-philia is showing).

It’s as sturdy as a rock and can print 3D models in one go. It is great news for 3D printing that the build plate won’t move. As a result, no leveling is necessary. As a result, CNC milling is more accurate.

3D prints made with the default settings produce good results with just a few kinks. If you play around with settings, you can make perfect prints, so you are in good hands with a 3D printer.

Will this feature blow your mind? No other feature compares.

Dual extruder tool heads are on this machine!

Using this add-on, it is possible to mix and match filament types. Different colors of the same filament can also be mixed and matched. This makes printing easy.

In the second part of this post, we will discuss laser engraving. Almost no artifacts can be seen in the engravings. Other than – wow, this is pretty much all I can say. The 2.8 watt blue laser diode from the discontinued VX is carried over into the VXX. This is not one of the strongest lasers, but it is powerful enough to cut softer materials and engrave leather, wood, plastic, and even plastics without overheating.

I’ve never seen a machine with better CNC milling than the CNC module on this all-in-one.

Here is a list of what has been improved from the original ZMorph VX.

It will cost you a pretty penny. If you want to get this laser 3D printer and CNC combo, you’ll have to pick a few pockets, but it’s worth it.

It was inevitable that Creality would go for the all-in-one 3D printer. It is the company’s answer to the success of the original Snapmaker, including a desktop 3D printer, laser engraving, and CNC milling.

What are the results? It’s a good deal for the price.

Using the instructions included with the 3D printer, the setup was quick and simple. It was a quality printer with a sturdy build.

Since 3D printing is my passion, I tested it first. Printing required me to stand up and look at the first couple layers.

As expected, the initial print turned out rather stringy. However, this is a common problem among Creality users. After adjusting the slicer settings, I had a good result. My prints were clean this time. My prints were smooth to touch and had fine details.

The laser module was then checked. Changing from the 3D printer to the laser took only a few minutes this time. These 3D printers are easy to use, which makes their purchase worthwhile.

Both the 3D printing slicer and laser software were effortless to use. The result was quite nice, and I enjoyed laser engraving it as well.

The speed is the only setting you have to change in laser engraving to get the best results (since the power remains the same).

You should wear the protective goggles that come with the laser printer while using it. This should not be overlooked. I suggest you move this 3D printer to an area that is well-ventilated because lasering produces a lot of smoke.

I would like to get to the CNC mill module, which is the most inferior part of the machine.

It took REALLY slowing down the speed settings to get decent results, so you should give this a pass. Higher feed rates resulted in unevenly machined parts. Slower speeds do produce decent prints, but this process takes a long time.

Drills with incomplete rigidity and slight wobbles are a major contributor to poor CNC milling performance.

Despite its CNC-based design, the Creality CP-01 is an amazing 3D printing and laser engraver. The Creality 3D printer is relatively cheap, like Creality’s other printers.

You cannot go all out when customizing the 3D printer using any of the above 3 in 1 models. It is natural that DIYers like you might want a machine that will scratch their DIY itch.

E3D Motion and the Tool Changer let you scratch away.

The level of customization possible is staggering. In this printer, you can combine 4 multifunctional tools in a single print. Tools like laser engravers, CNC tools, extrusion tool heads, and more.

Designed to meet the highest quality standards, E3D components are high-performing and best-in-class.

On E3D’s GitHub, you can easily download spare parts such as cable covers and spool holders.

If you’re really planning on getting one of these, you should be aware that you’ll need to set it up on your own.This sensor-based system allows for easy leveling.The print quality was phenomenal when I used different tool heads. Using a milling tool made even smoother the surfaces that were already smooth.

E3D ASMBL printers are expensive, as you might imagine. A costly affair is made even more costly when you buy different parts and play around with them.

Nonetheless, money cannot buy all the fun you want. Having endless customizability on this 3D printer is sure to keep you entertained.